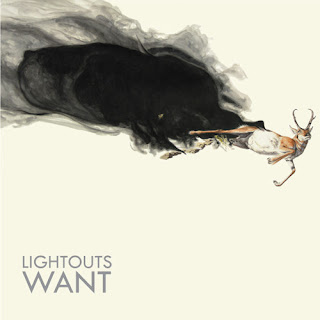 The last time Lightouts were mentioned around here, I was labeling their single, “The Big Picture” as straight-forward rock with some surprising ’80s goth tones. This week marks the release of the band’s debut albumWant, where we hear Lightouts expanding far past the sound that I had originally described their style as.

Want is very much a rock album. If you’re all about heavy, guitar driven tracks then you will find yourself in pure bliss while listening to this album. I could be ignorant and stop there with that simple rock title. Luckily for you, I’ve listened through Want a few times and there’s more below the surface.

So you’re not really into listening to hard hitting indie rock filled with pounding drums and energetic guitars. I get it, but don’t give up on Lightouts just yet. These guys are more eclectic than they at first seem. It’s within the details where the band’s influences shine.

If you’re not paying attention you’ll likely miss out, but if you keep your ears open you’ll hear inspiration pulled from a wide range of popular music: glam, garage, goth, new wave, shoegaze, and even some hints of jazz textures. Lightouts is exhibiting several decades of genres within their sound, and it makes their album so much more impressive than what any other typical, guitar band might put out. StreamWant below and if you like what you hear, get yourself a copy on iTunes.

Races – Year of the Witch

Kavinsky vs. Dada Life – Nightcall To Your …