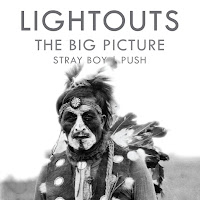 Earlier this month, Brooklyn eletro-rock duo Lightouts released their fifth single, “The Big Picture” and this will be band’s last single before their debut album, Want, comes out later this year.

“The Big Picture” premiered on Spinner.com a few days ago and singer Greg Nelson described the song as “a fuzzed-out epic pop juggernaut about transcending doubt, circumstance and fate. ‘Hearts can change, spells will break’“. While I don’t know about all that – Lightouts is the first band that I’ve heard in a long time whose music captures the melodies and urgent rhythms of post-punk bands like The Cure and New Order. Adding to the comparison to The Cure, Lightouts close the new three-track single with a cover of The Cure’s “Push”.

Below is the A-side to one of the band’s earlier singles – “The Cure for Shyness”.

The Vinyl District New Press: We Are Hunted, Spinner, The Music Ninja, Listen Before You Buy, & more