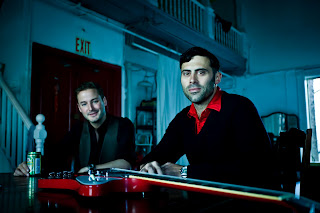 It’s unclear what I like more about Lightouts — their easy-entry, stuck-on-repeat songs…or their approach to releasing them.
Although they’ve been putting out music for only less than a year, the Brooklyn’s duo’s catalog is already bursting with four sharp EPs, all self-released. (The band calls each three-track item a ‘maxi-single.’ Fair enough.)
Last May’s ‘See Clear,’ the first salvo fired in Lightouts’ blitz, is one of the best debut singles I’ve heard in awhile. Rooted in the able ’90s song structure of restrained verses and rambunctious choruses, it’s a taut rocker that peaks before slyly ducking out the side door by way of an unexpectedly quick outro.
It’s also a fitting introduction to Gavin Rhodes and Greg Nelson’s philosophy of building quiet momentum steadily through frequent releases, rather than via some Lana Del Rey-style PR sledgehammer blow to America’s cerebellum. (I saw Del Rey’s pouting mug plastered on the window of a San Francisco cigarette shop the other day. A cigarette shop.)
Along with its featured title track, each Lightouts EP includes a B-side that, in some cases, stands toe-to-toe with the song portrayed in big letters on the cover. And while Rhodes and Nelson’s original material is always worthy of the front seat, the shrewdly curated cover versions punctuating all four EPs offer pretty accurate directions from the back: the Stone Roses’ ‘Here It Comes,’ ‘I Am The Key’ by the La’s, Guided By Voices’ ‘The Official Ironmen Rally Song,’ and the piece de rocksistance, a phenomenally brilliant pastiche of LCD Soundsystem’s ‘All I Want’ and David Bowie’s ‘Heroes,’ which along with ‘See Clear’ stands tallest so far amid Lightouts’ young discography.
And at a time when many bands seem to be de-emphasizing the importance of cover artwork, Rhodes and Nelson, despite only releasing music digitally to date, have opted for striking ink-on-paper works by George Boorujy for each EP. Chalk up a victory for cohesion.
It all recalls the energy of Oasis in their steak-and-potato days (albeit with far less bluster and hurl), when the fightin’ Mancunians put out a flurry of nine brilliant — and brilliantly designed — EPs throughout 1994-96 to complement their first pair of landmark albums.
Lightouts’ latest EP, released earlier this month, is ‘The Cure For Shyness,’ which includes a breakneck sprint of a title track backed by yet another strong B-side (‘Deep Ends’), as well as the aforementioned GBV cover. (As is the case with all the band’s releases, it’s available as both a paid and free download.) The title track’s live drums give the song a less boxed-in feel than the rest of Lightouts’ drum-programmed material, and as much as I like everything the band’s done so far, I cling to the traditional tenet that says every rock band worth its salt could use an Animal-like spazz behind the drumkit. 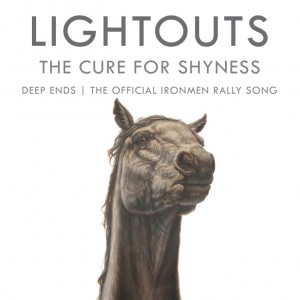 Rhodes and Nelson have indicated that a Lightouts LP (allegedly titledWant) is in the works, with another pair of EPs likely to precede it. Alright. ~ Charles Hodgkins
posted by brandracket at 10:14 am